A Chance To Do Some Good

A Chance To Do Some Good 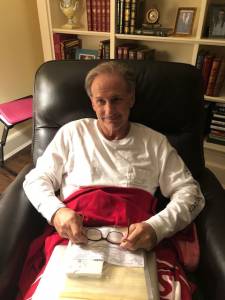 In crises big and small, New Yorkers have a well-deserved reputation for coming together and helping out in any way possible. Paul and I think the same thing will happen with regard to our longtime friend John Cottone.

One morning in 2018, John noticed that he looked rather jaundiced. He notified his doctor, and a few hours later, he was in a hospital emergency room. A few days later, Dr. Cottone’s test results came back. Doctors said he had stage four pancreatic cancer. He is understandably quite concerned about future medical bills. Moreover, he may have to leave his dental practice, which would be a devastating blow for his family.

Most of all, however, John is concerned about the family time he will miss. No amount of money can replace things like coaching your son’s ice hockey team, but your donation will go a long way towards making things right again.

As late as 1995, almost any cancer was essentially a death sentence. That was especially true of late-stage diagnoses. In these cases, even the most skilled doctors could do little more than make their patients comfortable.

But cancer survival rates have increased significantly since then. Even situations like the Cottone family faces — serious cancer at an advanced stage — are far from hopeless. Doctors have a number of options in terms of both traditional and innovative therapy.

Traditional therapy usually involves radiation to shrink the tumor, surgery to remove part of it, and chemotherapy to kill cancer cells. There have been a number of improvements here. Targeted radiation shrinks the tumor but does not affect surrounding organs, advanced surgical techniques enable doctors to remove more of the tumor, and chemotherapy drugs have fewer side-effects to patients can tolerate stronger drugs for longer periods of time.

There are non-traditional therapies as well. Proper nutrition and exercise helps the body fight the cancer, and this natural defense may be better than any artificial chemicals known to medical science.

Progress is not cheap. The average pancreatic cancer treatment costs close to $200,000 per round. Even these costs represent only a tiny fraction of the overall costs. On top of the medical bills, most cancer families must deal with lost income. Simply paying the bills becomes an ordeal, and the stress makes the recovery process even more difficult.

How You Can Help

Now, you have an opportunity to reverse this cycle. Your donation not only helps end the downward spiral of bills and depression. It lets a dear family know that someone cares about them. As much good as the financial donation does, the emotional support may be even more important.

Your gift does not just help the Cottones. Altruism (giving without the expectation of return) is the highest form of charity. That’s the best kind of giving, as it accurately reflects the spirit of most New Yorkers.

Be sure and leave a comment as well, because John would love to hear from you.